Novogene is capable of sequencing up to 200,000 human genomes per year at a competitive cost. Novogene hWGS service can provide data across a broad range of applications, including studies on genetic diseases, cancers, pathogenesis mechanisms, or population genetics. Multiple DNA sequencing technologies available at Novogene can identify the highly polymorphic and highly repetitive regions within the genome of interest, thereby providing a complete and accurate human genome characterization [1].

Human genome sequencing has been assisting researchers in the following research areas:

Note: Values of sequencing depths are only listed for your reference. Download the Service Specifications to learn more. For detailed information, please contact us for your customized requests.

GC content distribution aims to check the potential of AT/GC separation. Sample contamination, sequencing bias, and errors during library preparation can impact on the sequencing results.

Note: The x-axis is position in reads, and the y-axis is percentage of each type of bases (A, T, G, C); different bases are distinguishable by different colors.

Sequencing depth and coverage illustrate the average number of pair-end clean reads which are aligned to the known reference nucleotides. The sequencing coverage distribution determines whether the identification of variations can be done with a certain degree of confidence at specific base positions. 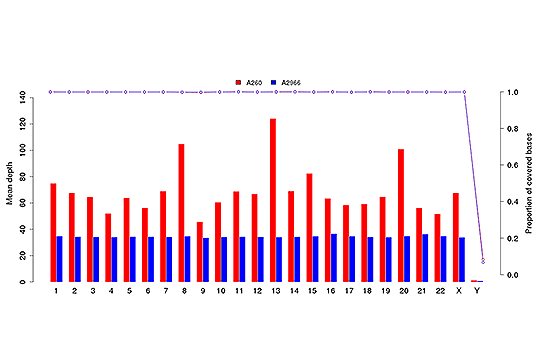 Single nucleotide polymorphisms (SNPs), also known as single nucleotide variants (SNVs), constitute the largest class of genetic variants in the genome. Another class of genetic variations includes small insertions and deletions (InDels) which are <50 bp in length. The InDels present in the coding region or splicing sites may cause changes in mRNA transcripts and proteins. The number of SNPs/InDels in various genomic regions 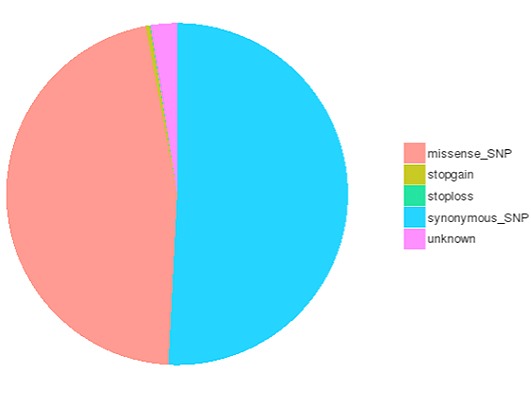 Structural variants (SVs) are genetic variants with relatively larger sizes (>50 bp), and they include deletions, duplications, insertions, inversions, and translocations. SVs form the underlying genetic basis of individual differences and have potential effects on the disease and cancer susceptibility.

The number of different types of SV in each sample

Note: The x-axis represents samples, and the y-axis indicates the number of each type of SV.

Copy number variants (CNVs) are genetic variants that lead to variations in copy number of relatively larger fragments (longer than 50 bp) among individuals. There are two types of CNVs, i.e. gain and loss of copies. CNVs may form the underlying genetic basis of individual differences and cancers.

The size of genomic regions affected by CNVs in each sample

Only a few mutations related to cancer can drive tumorigenesis by affecting genes. Significantly mutated genes (SMGs) refer to those mutations that show a significantly higher mutation rate than the background mutation rate (BMR), thus indicating a positive selection during tumorigenesis. Analysis of SMGs helps us pinpoint the key genes that are critical for cancer initiation and progression. 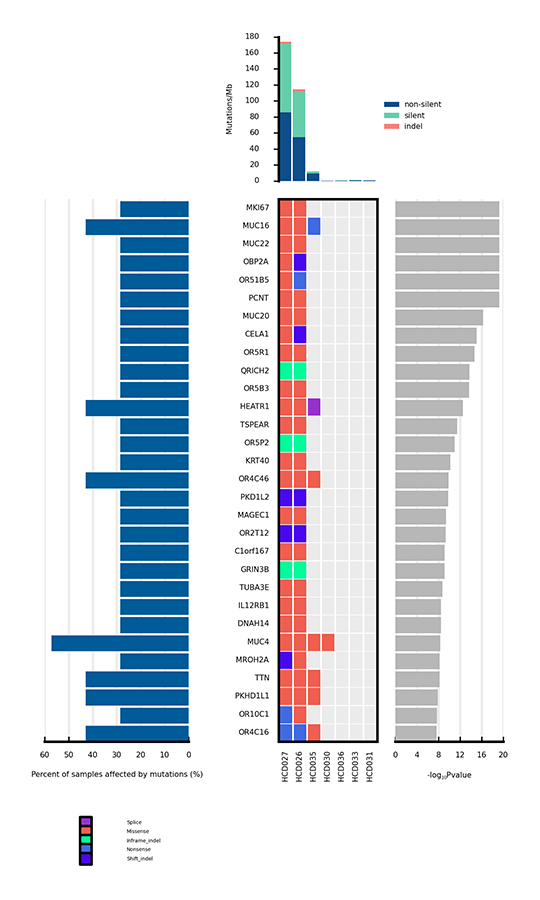 Note:
The bar plot at the top shows the mutation rate of each sample (Mutations/Mb). The heatmap in the center shows the types of mutations of each SMG across samples. The horizontal axis represents samples, and the vertical axis represents SMGs. Different types of mutations are distinguished by different colors. The bar plot on the left side of the heatmap shows the percentage of samples affected by mutations in each SMG, and the plot on the right side shows p values of SMGs.

Note:
The horizontal axis of each panel represents variant allele frequency (VAF). A cluster of mutations with relatively low VAF represents a subclonal population. The top panel shows kernel density of VAFs across regions with copy number one, two, or three, posterior predictive densities summed over all clusters for copy number neutral variants, and posterior densities for each cluster/component. The panels below the top panel show read depth versus VAFs for each class of copy number regions.

*Please contact us to get the full demo report.